In value terms, India’s electric vehicle market is likely to touch $150 billion by 2030.

The world’s most talked about EV company is set to enter the Indian market soon.

With the buzz around EVs reaching stratospheric highs, it’s no surprise Tesla would want a slice of the Indian market.

According to a report by consulting firm RBSA Advisors, the EV market in India is estimated grow at CAGR of 90% from 2021 to 2030.

So when will Tesla come to India?

Tesla’s plans to enter India have been put on hold since 2019.

In January 2020, the company had registered a subsidiary in Bengaluru called Tesla India Motors and Energy Private Limited.

This was done with the aim of cornering a slice of the automobile market in India, the fourth largest in the world.

People aware of the developments initially said the company was to set up a research and development centre in Bengaluru.

However, officials later confirmed the company was looking for locations to start sales of its vehicles.

The company has now received approval for seven of its vehicle variants from the Ministry of Road Transport and Highways.

While not much is known about the exact launch date of any of these variants, a few models are expected to be launched later this year.

There has been a delay, however.

Musk wants import duties to be slashed without a commitment to produce locally while the Indian government would rather have him manufacture the cars within the country.

This means that the Model 3, Tesla’s most affordable model, could cost almost double of what it does in the US.

Union Minister Nitin Gadkari said the model could cost lower at Rs 35 lakh if the company chose to set up a local manufacturing unit.

He has offered Tesla benefits under the PLI (production linked incentive scheme). To avail incentives, automobile companies (domestic or international) have to make investments of Rs 2,000 crore over five years.

The government has also revised the GST (goods and services tax) to 5% for electric vehicles (EV) compared to the 29-50% range for ICE (internal combustion engine) vehicles.

Tesla is free to avail this incentive too.

Tesla’s request for a reduction in import duties has other automakers concerned.

In September 2021, Shailesh Chandra, President of Tata Motor’s passenger vehicles unit said the reduction in import duties is contrary to the government’s FAME program which incentivises local production and affordability.

Incentivising of localisation remains the key to drive higher adoption of electric vehicles and making them affordable.

Thus, efforts should be made to make the products and components in India against subsidized imports.

Mahindra & Mahindra (M&M) too stated that an import duty cut would be unfair when the government’s priority is Make in India.

Tata Motors accounts for 90% of the passenger EV market in India while Mahindra & Mahindra (M&M) dominates the commercial EV space in the country.

However, Tesla is the largest profitable EV company in the world. Therefore, it’s no surprise that both companies would prefer to avoid competing with it.

Could Tesla really pose a threat though?

There is no doubt that the company is at the forefront of the EV revolution. In fact, when one thinks of electric vehicles, one thinks of Tesla.

Tesla’s sales have also increased steadily year on year. As you can see from the chart below the company’s deliveries have jumped over 10x from 2016 to 2021. 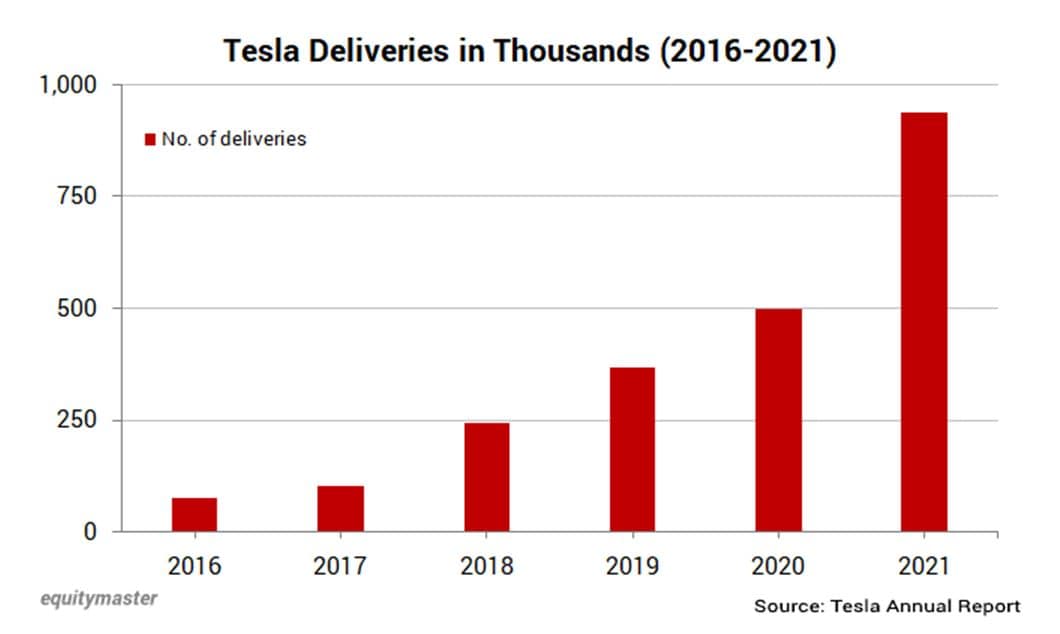 Moreover, the company is profitable.

However, the company’s market share globally has declined from around 18% to 14% in the last year as other global players have entered the EV space.

The company is slowly losing market share to industry titans such as Volkswagen, Ford, and General Motors as a slew of new EV models are hitting the market.

Globally, robust competition in Asia is proving to be an obstacle.

The automobile market in Asia is extremely competitive. A wide variety of EV models with various features are available at a fraction of the cost as compared to the US and Europe.

In fact, China’s best-selling EV, the Wuling Hongguang Mini EV starts at a base price of Rs 3.4 lakh ($4,500) which is around one-tenth the cost of the cheapest Tesla model.

Should the same competitive landscape emerge in India, it is unlikely that Tesla will eat into the market share of Tata Motors or Mahindra & Mahindra (M&M).

This makes it a luxury car not one many can afford. It also does not fall into the same segments that most Indian auto companies operate in.

Where Tesla does pose a threat though, is the luxury market. Among luxury brands, the company’s position appears to be getting stronger as demand for EVs grows.

Tesla beat Mercedes-Benz for the number three spot in new luxury-car registrations in the US in September 2021.

In India, it could give tough competition to Mercedes Benz, BMW, Jaguar Land Rover, and Audi.

The demand for luxury EVs in India is only going to increase with time and the competition is expected to be intense.

Mercedes-Benz has announced plans to introduce its EV, EQS saloon later in the year while Audi has kicked off a study to check the feasibility of assembling EVs locally.

Swedish automaker Volvo is also looking to enter the fray.

BMW, meanwhile, is seeking a duty cut on fully built imported vehicles, just like Tesla, but for a limited period as it is also considering localisation.

If Tesla aims to capture the premium automobile market in India, it would have to up the ante.

One of the things it could do is follow in the footsteps of technology giant Apple.

In 2017, Apple had requested the government to relaxe the 30% local sourcing condition for FDI in single-brand retail stores.

The Indian government at the time had rejected the company’s proposal.

Months later Apple set up its local manufacturing unit in India under the ‘Make in India’ program. It was able to lower prices by taking advantage of domestic manufacturing.

Following this, the company witnessed an increase in sales. In 2020, the company registered a 68% jump in sales of iPhones.

As a result, its market share is now one-third of the premium smartphone market in India.

Tesla could vastly benefit if it did the same.

The EV market is growing rapidly in India and is expected to contribute a sizeable portion in the near future.

The new ecosystem that will emerge will definitely disrupt the existing vehicle market. Moreover, companies that a part of this revolution will gain a lot.

How Tesla makes the most of the EV opportunity in India remains to be seen. Meanwhile, stay tuned for more updates from this space.

All the hype surrounding EV stocks is for a good reason. Slowly, EVs are replacing internal combustion engine (ICE) vehicles.

The transition to 100% EVs will bring plenty of opportunities for EV makers.

Disclaimer: This article is for information purposes only. It is not a stock recommendation and should not be treated as such.

(This article is syndicated from Equitymaster.com)