India doubled down on its spending commitment, relying on an already swamped debt market to borrow and spend big to spur growth. Bonds tumbled and stocks rose.

Prime Minister Narendra Modi’s administration will target a budget deficit of 6.4% of gross domestic product for the year starting April 1 — wider than the median 6.1% seen in a Bloomberg survey — as it prioritizes growth over fiscal consolidation. 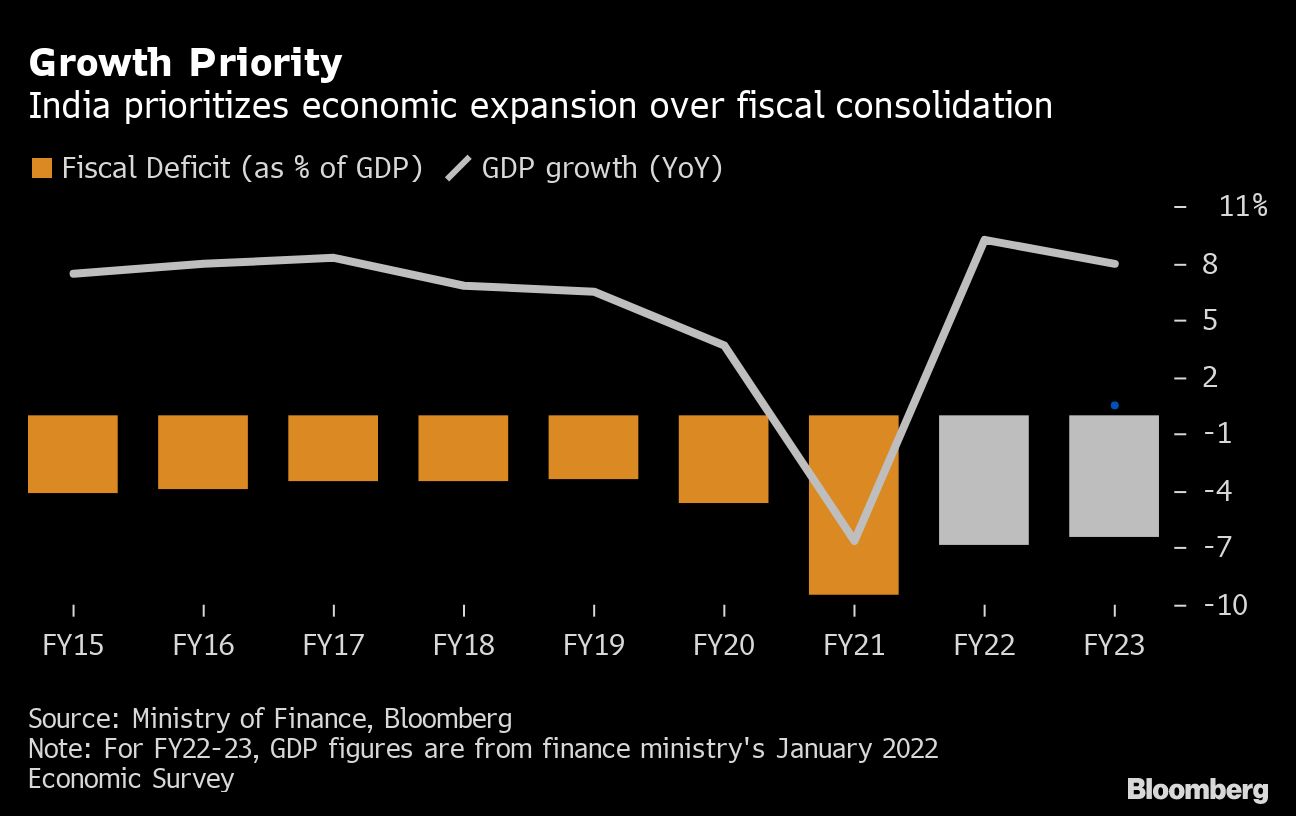 That plan will require borrowing a record 14.95 trillion rupees ($200 billion) to bridge the shortfall, much higher than the 13 trillion rupee consensus, as revenues from divestments are slow to materialize.

“While the fiscal expansion is expected to be pro-growth, the heavy supply is expected to worry the bond markets,” said Upasna Bhardwaj, an economist with Kotak Mahindra Bank Ltd.

Indian bonds fell, with the yield on benchmark 10-year notes rising by as much as 21 basis points. Stocks traded 1.5% higher, paring earlier gains of as much as 1.8%.

The looser spending puts India on track to post one of the deepest budget deficits among major economies as nations spend their way out of the pandemic-induced downturn.

Boosting government expenditure on infrastructure, creating jobs and increasing productivity are key to the country’s sustained recovery, with growth this year seen at 9.2%, the quickest rate among major economies. The country expects growth momentum to continue next year with an estimated 8%-8.5% GDP expansion.

“This budget continues to provide impetus for growth,” Finance Minister Nirmala Sitharaman said in Parliament in New Delhi as she presented the annual plan. After using her maiden budget in 2019 to outline the government’s vision for the next five years, she used Tuesday’s plan to unveil a so-called ‘Amrit Kaal’ — a Hindi term that loosely translates to golden era — that provides the blueprint to steer the economy for the next 25 years.

Sitharaman, who has increasingly turned to income from state-asset sales to fund budgets, said the spending proposals will directly benefit the country’s youth, women and farmers, as well as public and private investment.

The long-awaited listing of Life Insurance Corp. of India, which could replenish the state’s coffers by as much as $10 billion if the government sells a 5% stake, is expected “soon,” she said.

Tuesday’s proposals also included taxing any gains on crypto income at 30%, one of the highest rates among major economies. That could discourage trading in such volatile assets, whose ban the the central bank has repeatedly sought. The government also announced a central bank digital currency, shortly after China began CBDC trials in several cities and the U.S. Federal Reserve and Bank of England are looking into its possibilities.

The budget was also notable for what it didn’t include. Bond investors were disappointed by the lack of progress on inclusion of Indian debt in global indexes. Citigroup Inc. had on Monday recommended buying Indian sovereign bonds ahead of the federal budget, saying the budget session was likely to see law changes enabling inclusion of India’s bonds into EM bond indexes.

Other key points from the budget are:

The current fiscal year’s budget deficit was revised to 6.9% of GDP, against a targeted 6.8%

Spectrum auction next fiscal to ensure launch of 5G network

Dividend from RBI, financial institutions expected to be 739 billion rupees

(Except for the headline, this story has not been edited by NDTV staff and is published from a syndicated feed.)