Two years ago, famously, Musk convinced Rogan on his podcast to buy the Model S P100 which he recently upgraded from.

The Cybertruck has been greatly modified from its original unveil

Podcasting legend Joe Rogan, who, over the years, has developed a special kinship with Elon Musk, has posted photos of the Tesla Cybertruck’s prototype. Rogan, who stays in Austin, Texas near the Tesla gigafactory has featured Elon Musk, Tesla’s techno king, a number of times on his podcast, posted a number of photos of the Cybertruck prototype which have presumably been taken at Tesla’s new facility. Only recently, Tesla’s Elon Musk had revealed that the Cybertruck had been delayed till 2023 due to a combination of issues like battery supply, increase in the cost of the technology that Tesla was implementing, and other supply chain issues like the semiconductor crisis.

Musk had been hinting for months that the original CyberTruck which he had unveiled before the pandemic had gone further design and feature changes which could have led to drive its cost up from what Tesla had announced in 2019. At the time, Musk shared an initial price of $39,999 for the electric pickup truck. 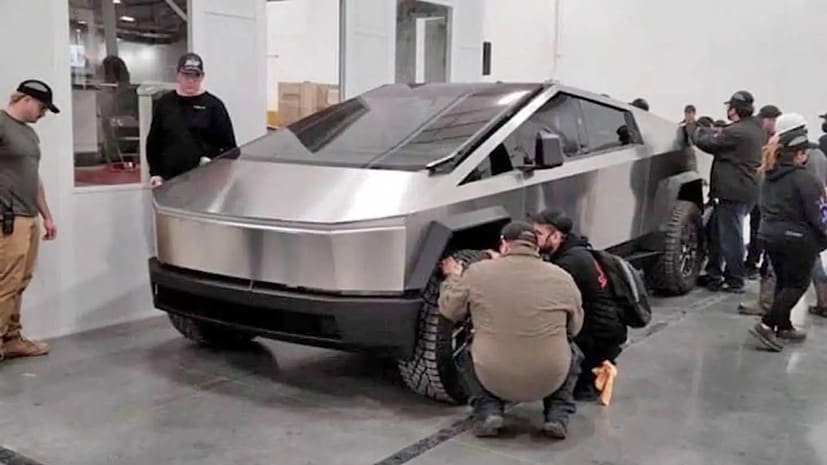 Rogan was all praises for the prototype which Musk had admitted to being driving in the Texas gigafactory.

“The cybertruck is the coolest car I’ve ever seen in my life. Insanely attractive in real life, and feels like a huge leap into the future,” said the podcaster.

Rogan, in 2020, shifted his podcast from YouTube to Spotify and has been in the news for all the wrong reason and has been deemed as an anti-vaxxer by many liberals.

Recently, legendary Canadian musician Neil Young demanded that Spotify remove his music from the platform because it was promoting Rogan’s podcast where he has shared his anti-vaccination sentiments numerous times. As for the car, perhaps, it will be worth a shot checking out the podcast where he may shed some light on the new Gigafactory and the Cybertruck.

Rogan already owns a Tesla Model S Plaid edition. Two years ago, famously, Musk convinced Rogan on his podcast to buy the Model S P100 which he recently upgraded from. It was the very same podcast where Musk smoked marijuana in front of the entire world. Rogan is a self-professed motorhead having many classic cars and has featured on automotive shows like Jay Leno’s garage.