The Kia Carens is ready to roll. The strategy from Kia has been very clear – to stay with utility vehicles and not bother with sedans or hatchbacks. At least for now. The Carens is the brand’s second play in the MPV space – following up on the larger and more premium Carnival. The name is not new to buyers in many global markets, but with this fourth generation, it’s still new to India. And yes, the Carens name has been revived, though otherwise has little linkages to its predecessors. The Carens we get shares its platform with the Kia Seltos, Hyundai Creta – and more significantly, the Hyundai Alcazar. So is it Kia’s version of the latter? The pitch is in fact very different. Ameya and I have both spent some time driving the Carens, and we have tested the top-spec in the turbo petrol and diesel variants.

While the Alcy (Alcazar!) is a definite SUV positioning from Hyundai, Kia claims to be creating a new segment with the Carens. That is basically not true, since the Carens is an MPV, dressed in crossover elements to hike appeal. Kia just doesn’t want to call it either of those so let’s just leave the company’s marketing spiel aside! The Kia Carens is very much an MPV, and its big USP is its 3-row seating, which comes in two configurations – 6-seater and 7-seater. And there will be 5 trims – Premium, Prestige, Prestige Plus, Luxury and Luxury Plus.

The stance on the Carens is more crossover-like thanks to the upright proportions, large wheel arches, SUV-like cladding and bumper design

The Carens’ styling brings the ‘Opposites United’ design language to India for the first time. This is Kia’s new design direction, and we have showed it to you exclusively, on global products like the Kia EV6. This involves using a slim gloss-black strip between the lights that has a geometric pattern of opposite facing surfaces. This is not a grille, and gives the car a definite look. The headlamps and taillights are LED and now feature what Kia’s calling a ‘star map’ pattern – inspired by constellations it seems. So it’s bye-bye to the heartbeat we saw on the Seltos and Sonet. The LED daytime running lights (DRLs) only kick in at the higher two trims. In the Luxury and Luxury Plus that DRL also has an integrated turn indicator. Shark-fin antenna, two-tone alloy wheels, roof rails – also start appearing as you go up the variant ladder. The stance is crossover-like thanks to the upright proportions, large wheel arches, SUV-like cladding and bumper design. Previous Carens models had more minivan/station wagon like styling. But with this one, the attempt is to cash-in on the SUV obsession – and rightly so. 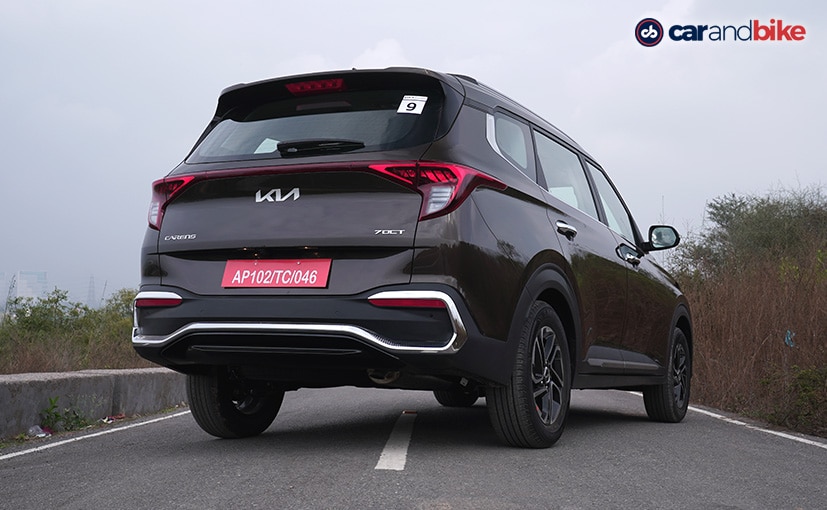 The chrome lower down in the bumpers will remind you on the Seltos’ grille – complete with the grid-like pattern hewn into it. That’s a good connect to Kia India’s other portfolio vehicles. Overall though, the car’s face is what really conveys a new modern feel, even as the rest of the proportions are traditional. And you can expect much more of the Opposites United design language from Kia from here on, including on the Seltos facelift next year.


On the dimensions front the Kia Carens is 4540 mm long, making it longer than the Maruti Suzuki Ertiga or XL6 and marginally longer even the Hyundai Alcazar, and much longer than the Seltos. It is 1800 mm wide – the same as its sibling, but marginally bigger than the rest. And the Carens is 1708 mm tall, giving it a good stance and ride height. The wheelbase is the most significant thing here. At 2780 mm that is class-leading, when you compare it to the others, even the Mahindra Marazzo and Toyota Innova. It also does well on ground clearance. 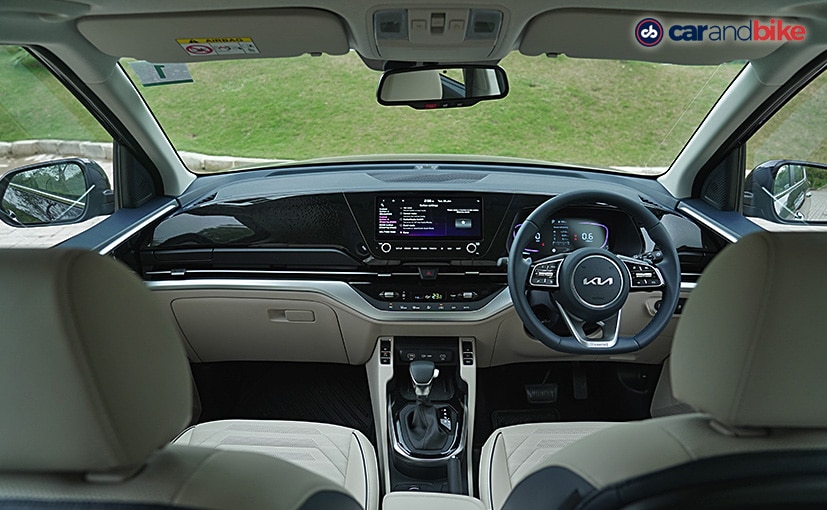 The Luxury Plus variant has the option of blue and beige two-tone treatment, which is otherwise black and beige

There’s a new design language for the cabin too, with new materials and colours. The Luxury Plus variant has the option of blue and beige two-tone treatment. Otherwise you get black and beige. The cabin is loaded as you’d expect from Kia! And so large screens, Kia Connect with remote functionality and some driver aids, smartphone connectivity, wireless charging, many USB charging points, and even ambient lighting and a sunroof at the top-end. The layout is smart, with a new printed pattern on the main dash elements, in gloss-black. And there are some nice touches – like vented cup holders, front and back (to keep drinks cool). The 10.25-inch touchscreen does tend to look bigger on the Seltos or on the Sonet – and so because of the layout it looks smaller here. But it works well, and is easy to navigate. The virtual instrument cluster is also smart, and its colour scheme changes with the drive modes. it kind of looks a little small because of its layout. The digital cluster has an LCD screen with a TFT info display built-in. The entry variant gets neither. Also at the top-end is front-seat ventilation, paddle shifters on the autos, auto wipers, and the Bose sound system. Oh, and yeah – the 6-seat configuration is only available with the Luxury Plus trim – with all bells and whistles. The rest are all 7-seaters – with the second row getting a 3-seat bench, and not the captain seats. The charging points are all USB type-C, and yet the smartphone connectivity is a regular USB slot – so you’d need a different cable for Apple CarPlay/Android Auto, but not for charging. Go figure! But you at least do have them in all three rows. 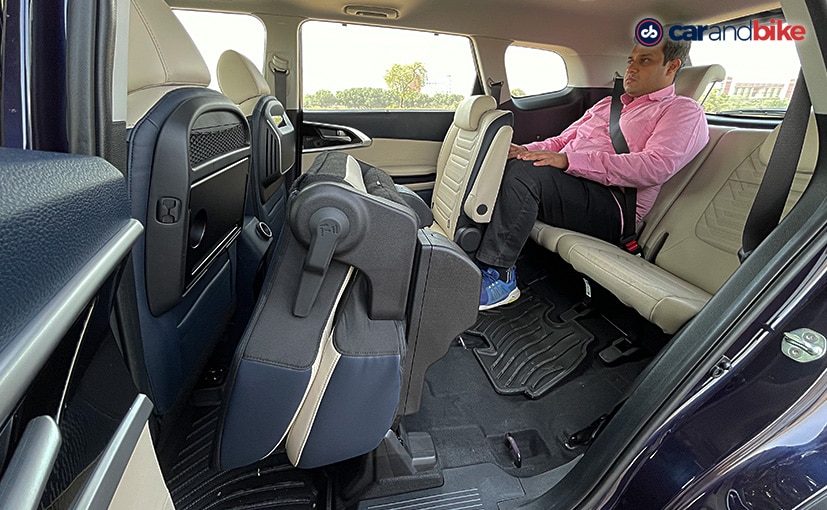 The third row is roomy and comfortable, even for “bigger” adults, and that’s a big plus for the Carens

The third row itself is surprisingly well done. I am never a fan of the 3rd row in any car – and the Carens surprised me. Ingress and egress is not bad – with one side of the second row tumbling down and folding forward electrically. There is a mechanical option on the other side too. The seat itself is decently comfortable, and the legroom is the big surprise. Under-thigh support is as good as I have seen (still not enough but way better than rivals), and the seat back angle is also good. It wasn’t just me – but Ameya also tested the third row for comfort. And given he is – let’s say a ‘bit’ larger than me – his feedback was also important! The fact that he found is roomy and comfortable says a lot! There are roof-mounted AC vents for the two rear rows, and they are also effective. There is a blower speed control in the second row for these vents. One thing I find very cool though is the air purifier that comes with the top two trims. It is built-in to the rear side of the driver’s seat, and I have to say is very smartly done. The slim packaging makes it compact, and yet it has a sleek little touch control panel and display on it. Its placement also allows for easier cleaning and replacement of filters, etc. 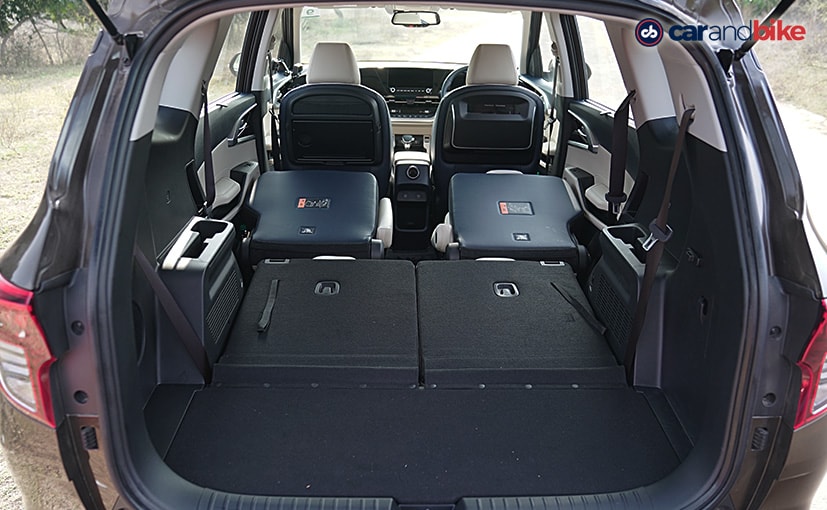 With all the three seats up there’s 216 litres of luggage space that you get, which is decent, with the third row down, there’s a generous 645 litres of bootspace on offer. The second row also folds down fully flat, and then cargo space goes to a whopping 1164 litres. 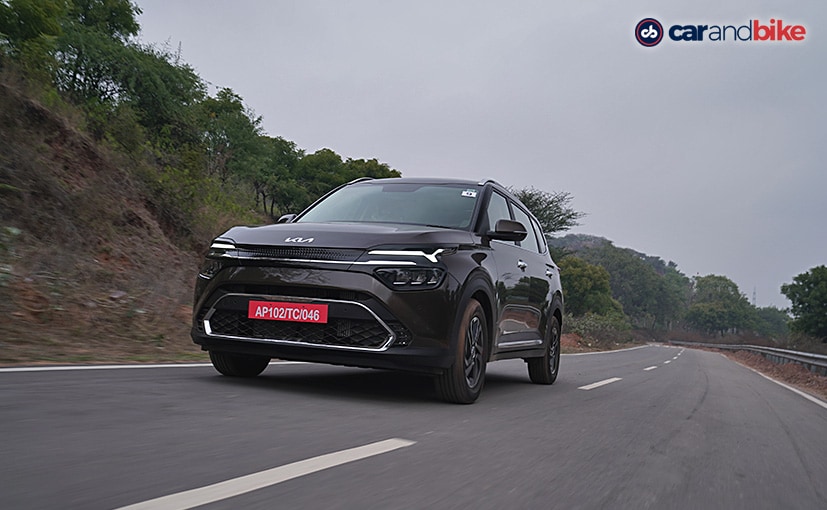 The Kia Carens is being offered with the same engines as the Seltos. That means two petrol options and one diesel. I bullied my way into getting the turbo petrol because I was excited that the Carens has this engine. I remember that Alcazar didn’t get it, and had found that surprising. And so I may be built up in my head a little bit too much. I expected this car to be a lot sportier than it ended up being! The overall level of refinement is not bad, but it’s a very rev happy engine. It makes a lot of noise and that doesn’t necessarily translate into performance. Still, the turbo is effective, and the car gets to higher speeds okay. When you use the paddles and drop gears, the engine makes a lot of noise, but there’s no grunt to go with it! That a lot of that noise also filters into the cabin, isn’t great. So for me the performance is good. It’s not great. The 1.5-litre motor makes 114 bhp, and has only a manual avatar. Neither Ameya nor I got to drive it, so let’s see if we can get our hands on one later! 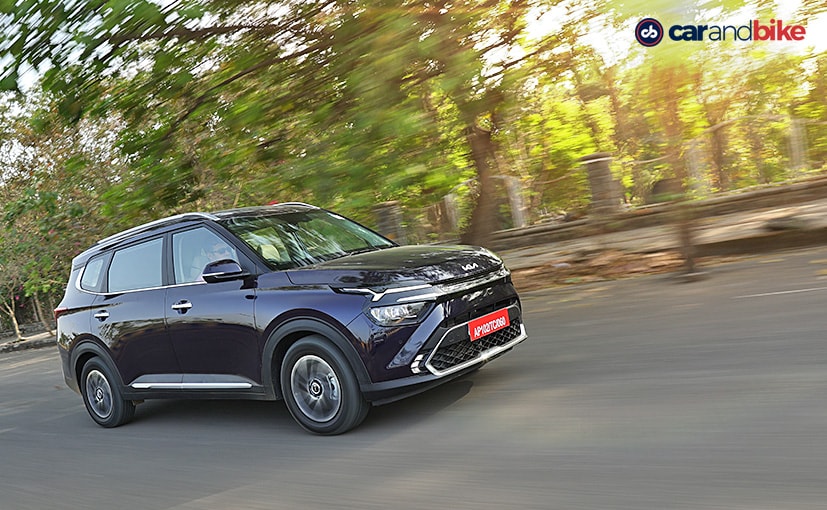 While both engines get the job done, performance should have been further refined and sportier to match the opulence the Carens offers

Ameya did test the diesel and it too came across as a tad underpowered. Initially, up to say 2000 rpm there’s hardly any power that comes through and that is a bit annoying, but then it has a strong mid-range, and it keeps pulling till about 5500 rpm. Once it crosses the 3200-rpm mark, it too gets a bit noisy. The engine does have an auto option. The 6-Speed torque convertor is not sprightly, but gets the job done. I do see a lot of people opting for the automatic on both engine types. There are three drive modes – you get Eco, Normal and Sport. Besides the differences in throttle response, Kia says that the steering also kind of stiffens up a little bit in sport. It does, but not a whole lot. I would have liked it to be a lot stiffer, so that get a little more confidence especially when you’re doing some high-speed cornering. The drive modes are also marginally different at best. Overall though I feel the performance should have been further refined and sportier, to match the opulence the car offers – especially given that Kia will target individual/family buyers, and not the fleet market with the Carens.

But that’s where the Carens’ trump card comes to the fore. The car’s refinement and USP lies in its ride quality. The handling is pretty good too. And the ride quality becomes important because the comfort I got – both in the front and back – is really what a lot of buyers will be looking for from the Carens. 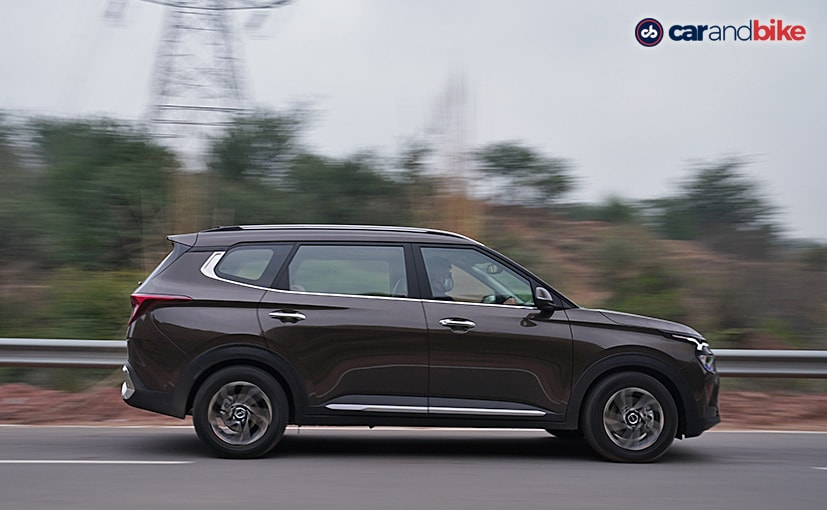 This is the other area that Kia has had a strong focus on with the Carens. Any stress on safety makes me very happy as some of you would know! So I’m really pleased with all the safety features, and the majority are standard across variants and trims! Six airbags, ABS, ESC, downhill brake control, disc brakes all round, tyre pressure monitoring, Isofix child seat anchors and more are standard on the Carens. Kia also says the Carens uses high-strength steel in its structure, so we hope for a robust crash performance rating too. Seems like the Carens is gunning for segment best on space, comfort, and safety then. 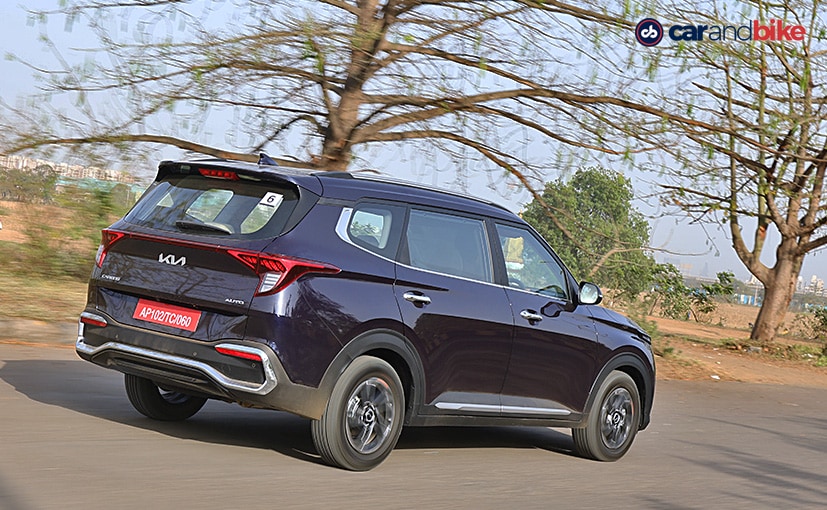 It is not surprising that the Kia Carens is a well-rounded package. It comes across as premium, well-appointed, comfortable, and roomy. And the good looks will certainly only help its cause. It is not powerful or sporty, and so it lets you down on performance – which appears to be its Achilles heel. But I do expect Kia to go super aggressive on pricing. and that’s because this is one car that will bring in volumes. Conventional wisdom says it will be priced in the ₹ 16-20 lakh range across its three engine types and 5 variants. But Kia could choose to go more aggressive if it really wants to kill the competition. And we will pit it against those rivals too once we have the actual prices.