After almost 35 years of riding the waves, surfer Murthy Megavan opens a new surf school in the coastal fishing village known for its young talent

Murthy Megavan fondly remembers the first time he touched a surfboard. The year was 2001.

“It was Surfing Swami’s [Jack Hebner, one of the pioneers of Indian surfing] board. I was fascinated.” Two years later, he bought his very first surfboard. The fisherman-turned-surfer’s story — as a 10-year-old, just before he dropped out of school, he hopped atop a broken wooden door to ride waves — has been much written about. Having grown up in Kovalam, a fishing village by the sea known for its curvaceous shoreline and relentless waves, Murthy and the ocean go back a long way.

Chennai’s burgeoning surf culture was pioneered by the Covelong Point Surf School (now, Surf Turf), run by TT Group’s Arun Vasu, one of India’s leading windsurfers. It was here that Murthy — who collaborated with them from 2013 to 2020 — came into his own as an instructor. Visitors, tourists and children from the village quickly took to his tutelage.

Today, after 35 years of riding the waves, Murthy finally stands in front of his own surf school. With his characteristic toothy smile he states, “It’s nothing short of a dream come true.”

As one negotiates the bumpy byroad that leads to Covelong Point Beach, Murthy Surf School stands out between empty plots of land; a white building, parts of it still sheathed in scaffolding. At the entrance, 12-time surfing world champion from the US, Kelly Slater seems to have caught a wave; albeit as a projecting mural.

Inside, surfboards in every possible colour are lined up in a storage room as yet another mural of a large wave taking form catches one’s attention. Next to this “board room”, where minor repairs can also be done, is the kitchen where Murthy and his wife Sarala, plan to whip up homemade coastal delicacies for students and customers. He lists: “Prawn curry, fish curry, coconut chutneys, dal…it will be simple and home-made.” Upstairs, a thatched roof will complete the now-open terrace where people can feel the “ocean breeze and relax”.

At the entrance, Murthy also plans to set up a small surf shop where basic gear like T-shirts, caps and sunscreen will be sold. But what he is most excited about is the office room that will double up as a counselling centre for people from Kovalam and nearby villages. It was during his time at The Banyan , Kovalam as a community outreach manager that he realised the importance of addressing mental health among his community. Sheena Ramanalukkal, his ex-boss, joined in offering to lead these sessions. She is also a partner at the school.

As for surfers, Murthy adds, “For us, a good wave is enough to clear the mind.” Be it surfing or counselling, the services will always be provided free of cost for people from the village.

Murthy’s team comprises 10 instructors: while five of them are National-level surfers, the rest are young surfers with a knack for teaching, and all of them hail from Kovalam. The instructors, who have trained under Murthy who himself is an International Surfing Association (ISA)-certified instructor, will prioritise one-on-one lessons. 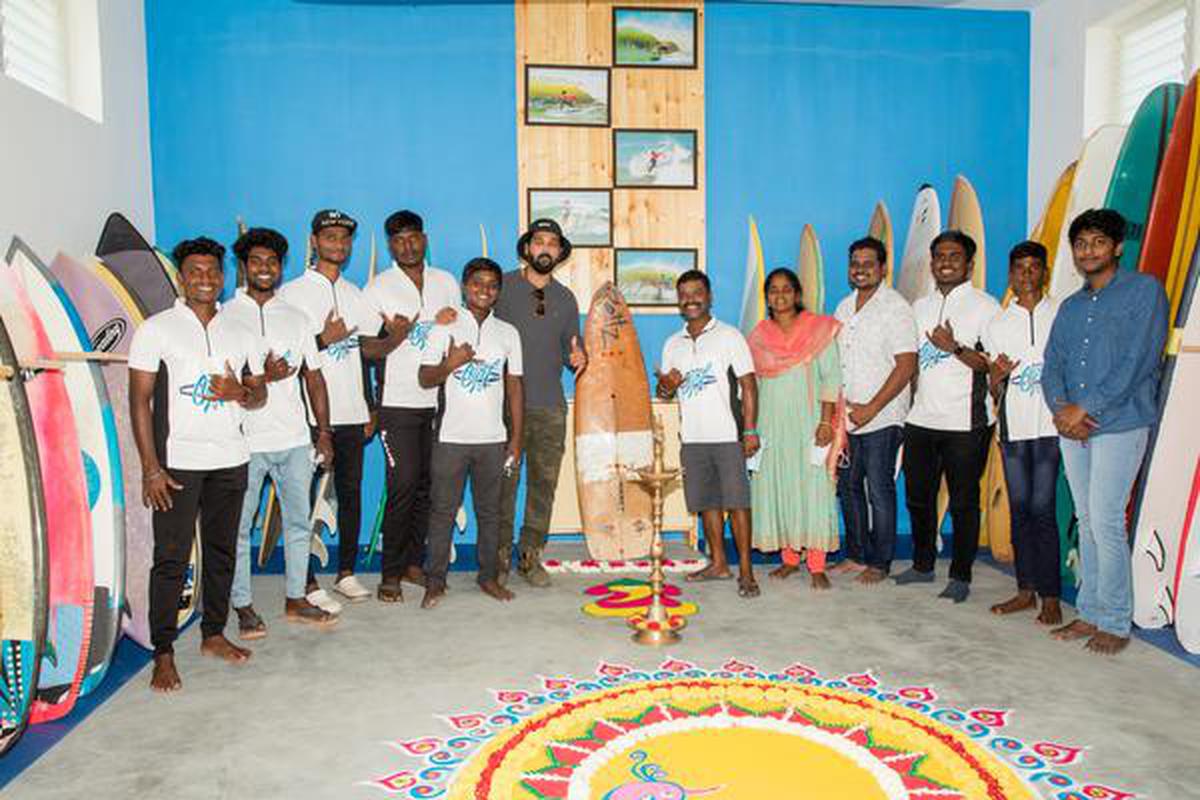 Apart from surfing, kayaking and stand up paddling classes are on offer. However, Murthy wants to ensure that students learn more than just technique at his school. “I want to give people the experiences that I have had in the culture I grew up in. While kayaking, we can watch dolphins. I will also take them fishing! I know all the right spots,” he says, adding, “Another spot that not many know of is in the Muttukadu backwaters where there are mangroves. This way, students can bring about a balance between learning and exploring.”

The self-taught surfer’s professional journey with the watersport has not been devoid of challenges. But he says with a laugh, “Neraya enjoy pannanen (I enjoyed a lot)! I really learned a lot about life through surfing.” In 2020, his decision to become independent was not an easy one to make. He recalls, “I believed in three things: in myself, the ocean which is akin to my mother, and my customer.”

Murthy is clear about his goal for the school. “I want to teach many more children from our fishing village. In the village, there are many boys who have dropped out of school to go fishing. They should be able to learn surfing and open their own schools in the future, and make a living.” At the moment, the village has seven surf schools, a spurt led by Surf Turf.

Now, Murthy is starting again from scratch. As his school slowly came together, for almost a year-and-a-half, Murthy continued to take classes with the help of his jeep, a tent and a Syntax tank. He would drive to Covelong Point beach, pitch a tent and start his early-morning and late-afternoon lessons. “I bought a tank and kept water ready for my students because I didn’t have a shower room or toilets. Still, there were many who joined me. It was very encouraging,” he smiles, adding, “I would tell them, the ocean is my office.”