A number of leaders have resigned though the exact number remained unclear, reports said.

Party offices were ransacked in various parts of the state and protesters gathered in several areas with placards. Security has been stepped up around the BJP headquarters in Imphal.

A few party functionaries who were hoping to get tickets have resigned though the exact number remained unclear, reports said. According to sources, most of the disgruntled leaders were those who were not selected to accommodate defectors from the Congress.

At least 10 former Congress leaders who joined the BJP were given tickets as the BJP announced it would contest all 60 seats in the Manipur assembly elections, releasing a list of its candidates.

In the 2017 election, the BJP won 21 seats but formed the government with the help of smaller parties and independent MLAs. Of these, 19 MLAs have been given party tickets and three have been dropped, BJP sources added.

The Manipur BJP has fielded only three women and one Muslim candidate. Former Manipur Congress chief who joined the BJP, Govindas Konthoujam, has also got a party ticket to contest the election. 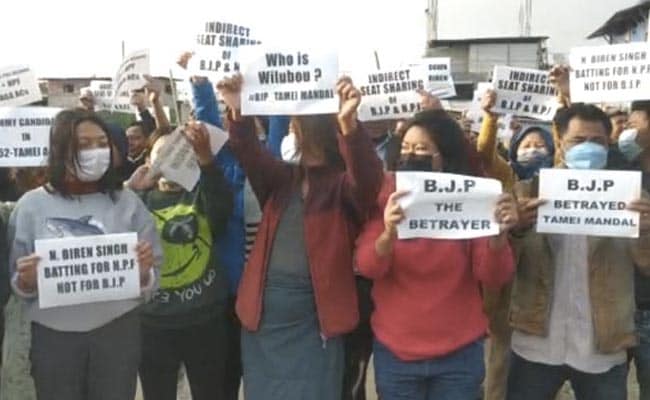 Most loyalists of the Chief Minister have got party tickets, BJP sources said.

“BJP will contest all the 60 seats and will get a majority on its own. The Modi government has ensured that Manipur will get a stable government and will continue to ensure the development and peace of the region,” BJP’s Manipur election in-charge Bhupendra Yadav said.

The BJP-led National Democratic Alliance is in majority in the Manipur assembly. This includes 30 BJP MLAs, three MLAs from the National People’s Party, four Naga People’s Front and three independents.