CNG and electric-powered cars appeal to those buyers looking for clean and affordable running, but these come at a premium over petrol-powered vehicles. It’s also interesting to note that there is a stark distinction in their brand image as well– as EVs are seen as a more premium and upmarket product, while the CNG enabled cars, are thought of as more rudimentary and for the cost-conscious individuals. Even lining up to fuel at different pumps mostly behind public transport vehicles has certainly dented the market appeal of these cars. But Tata Motors is looking to change this opinion, and for this very reason, introduced new CNG products in the Indian market, that is in fact borrowed from their passenger vehicle outfit. Adding icing to the cake is the fact that they are also offered in a fully-specced, top-end variant of their respective siblings. We recently got to spend time with the Tata Tiago CNG, or iCNG, as the company likes to call it and have lots to report. So, let’s begin, shall we?

Let’s start with the design changes on the Tiago iCNG first. Now, the Tiago iCNG comes in four trims- XE, XM, XT, XZ+ (ST), and XZ+ (DT), based on the facelifted Tiago launched in 2020, and so receives no major cosmetic changes to its exterior. The only difference here, however, is the addition of the ‘i-CNG’ badge on the tailgate. The rest of the elements are carried over from the top-spec trim that it is based on. We have the XZ+ variant with us today, wrapped in the ‘Midnight Plum’ shade, which not only adds its own unique touch but also looks quite dapper.

Based on the facelifted model, the Tiago iCNG receives no major cosmetic changes.

The chrome finish for the grille, inside door handles, and on the boot lid are some of the elements we find on the top-spec version. Speaking of the boot, sadly you get a reduced storage space of only 80-litre compared to the 242-litre of its petrol sibling, as it houses the CNG tank here. 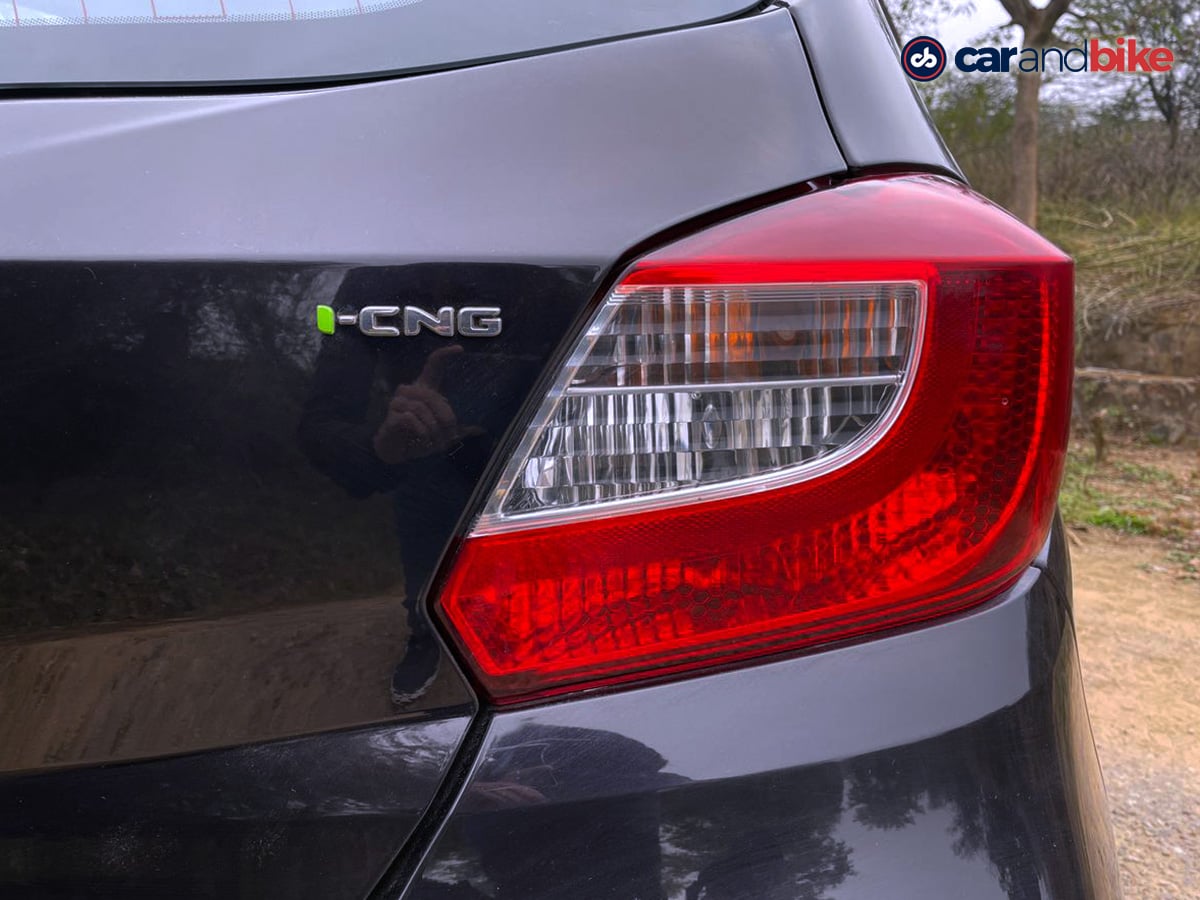 The ‘i-CNG’ badge is positioned on the tailgate.

We feel, if Tata is making a claim of going premium with this product for a CNG buyer who has so far not had any options, then they should have also spent some money on R&D to develop an underbody CNG tank or some other solution to be able to offer boot space as well. Other notable elements include the projector headlamps with integrated LED DRLs and the 14-inch steel wheels that it runs on. 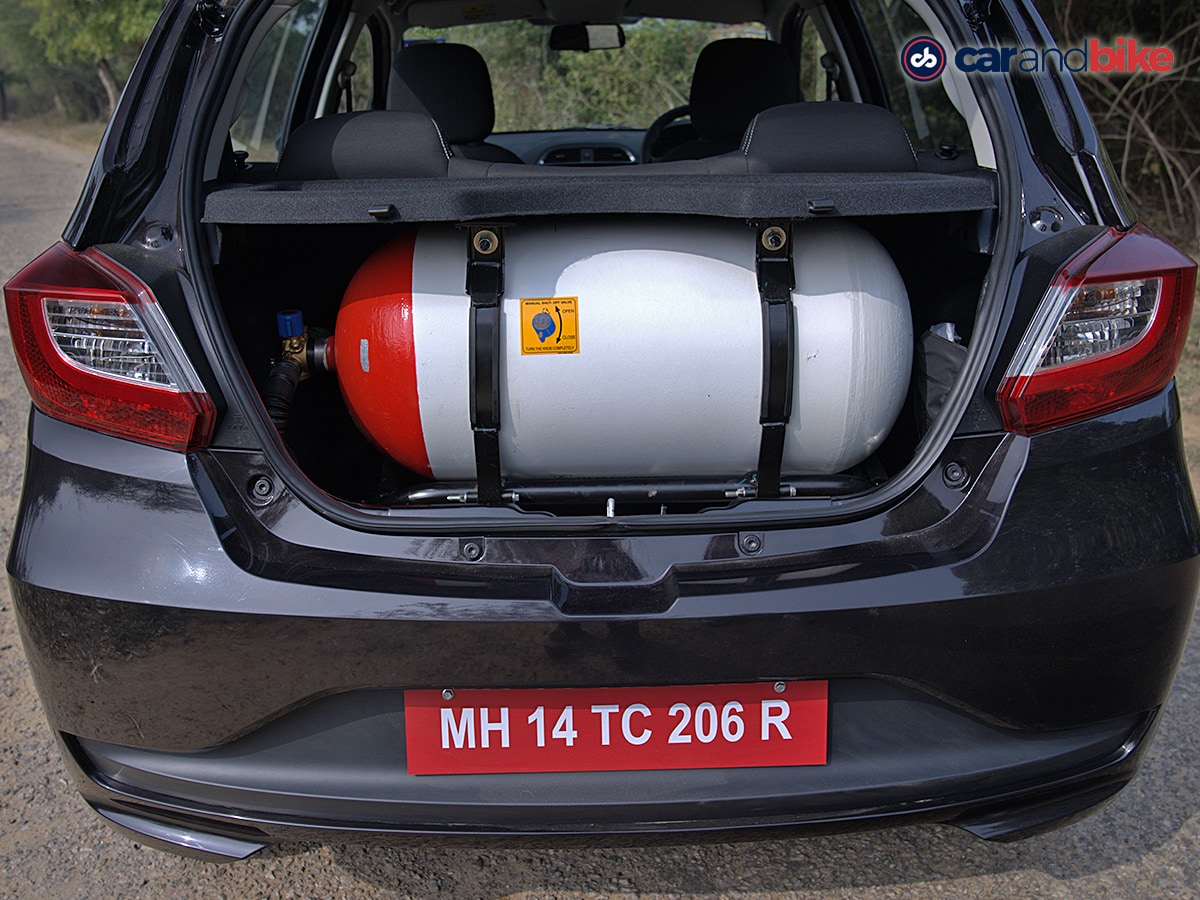 Thanks to the CNG tank, the boot space is reduced to 80-litre from 242-litre, with barely any place for luggage.

Inside, apart from the black and beige dashboard, and the upholstery, not much has changed. The fit, finish, and quality of materials are much like the standard version. The standard digital instrument cluster is slightly tweaked to accommodate the CNG icon on the left section of the screen, while the right section fits the fuel gauge for both modes of fuel. 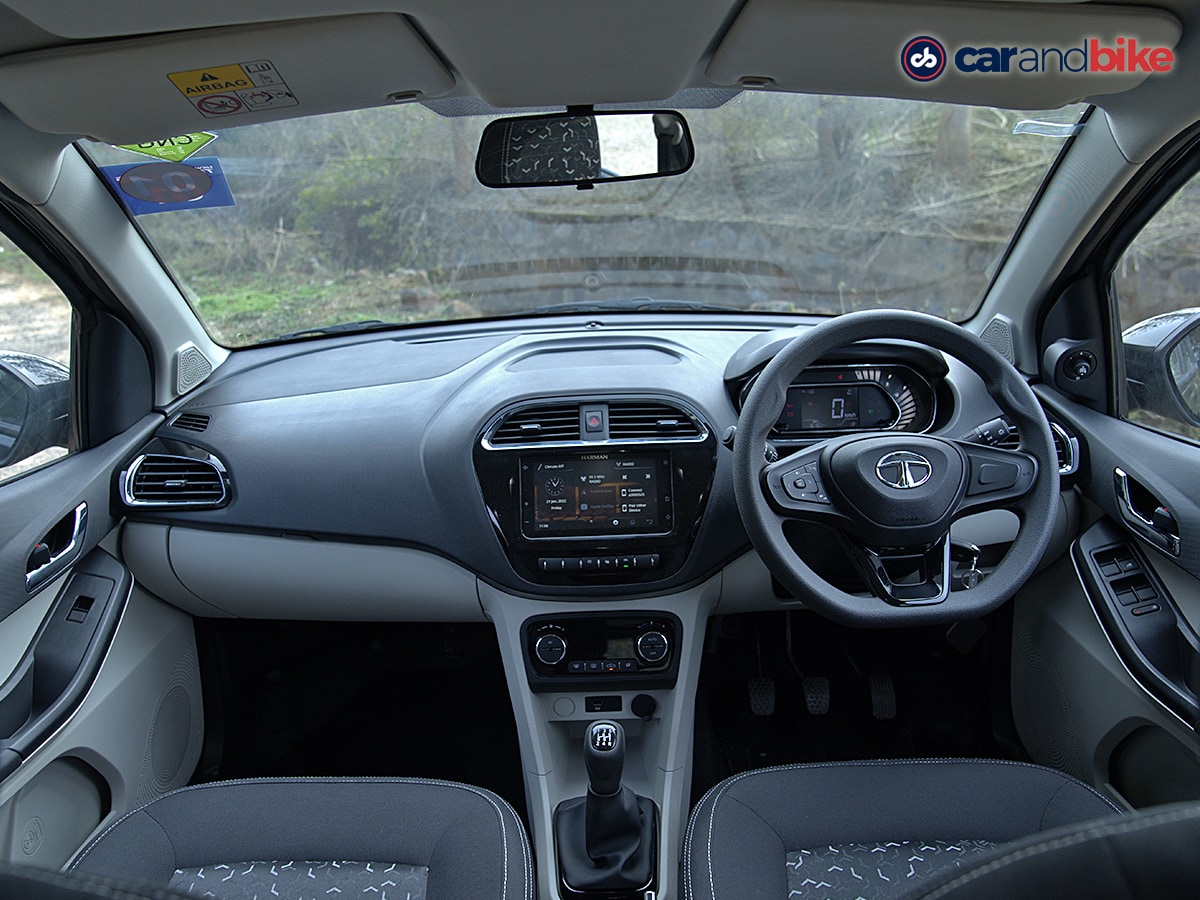 Apart from the black & beige dashboard, and the upholstery, not much has changed inside.

The readability of the information displayed is also quite clean and bright. The rest of the cabin is untouched. You get the 7.0-inch touchscreen infotainment system complete with Android Auto and Apple CarPlay, 8-speaker Harman audio system, automatic climate control, electrically adjustable, and foldable wing mirrors. Go lower down the trim order, and the Tiago still gets a fair number of features that would appeal to a buyer opting for the base variant, or even the slightly higher ones. 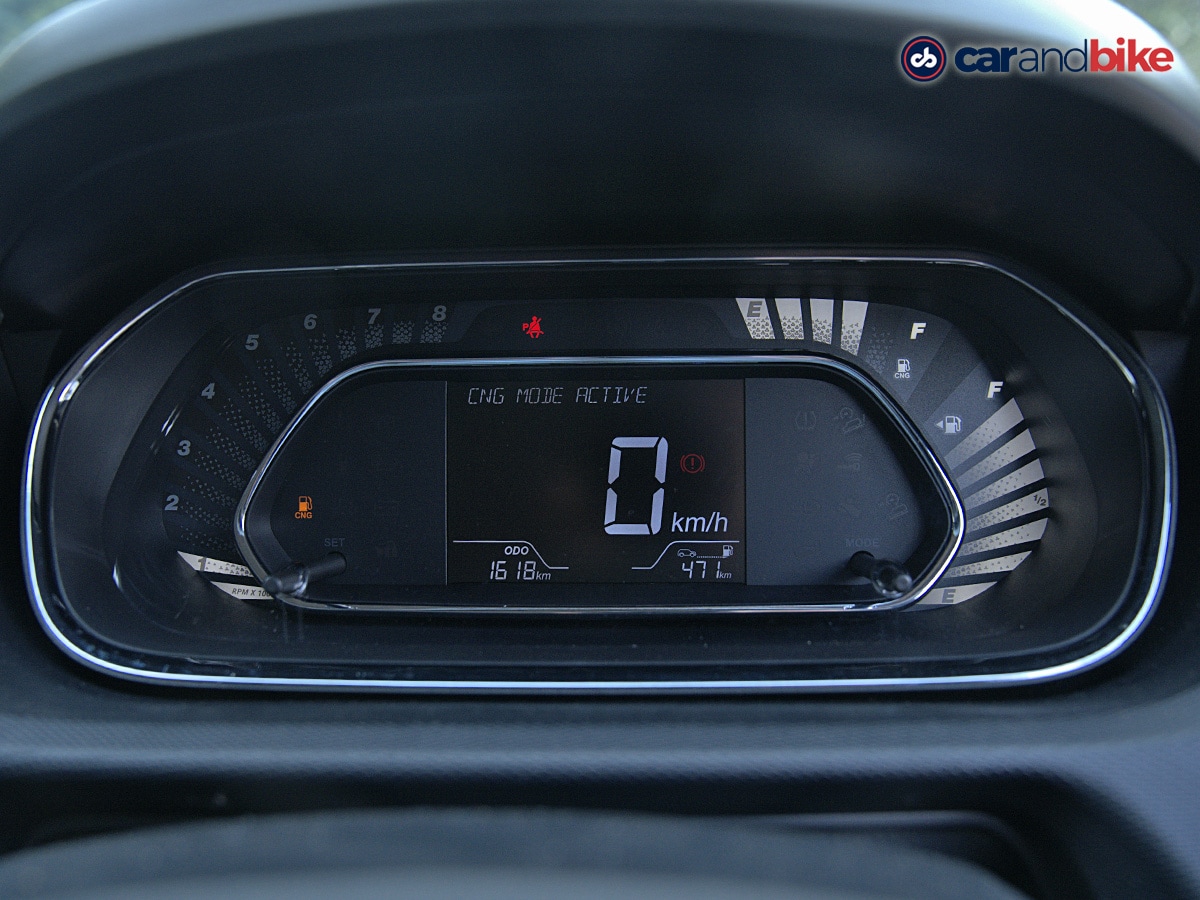 The digital instrument cluster is tweaked to accommodate the CNG icon on the left section of the screen.

Apart from the standard safety features one receives on the top-spec version, you also get manual AC controls, black & grey interiors, all four power windows, rear parking sensors with display, manual central lock, piano black ORVM, and a cooled glovebox, which are all part of the other trims.

Tata Tiago iCNG: How Is To Drive?

The Tata Tiago iCNG features the same 1.2L Revotron, 3-cylinder petrol engine that is good enough to produce 73bhp and 95Nm of peak torque, which is 13bhp and 18Nm less than its petrol sibling, whereas, transmission is handled by the same 5-speed manual box. We drove the top-spec XZ+ Tiago for more than 100km, and our initial impression is that it retains the fun, zippy drive that the Tiago is known for. 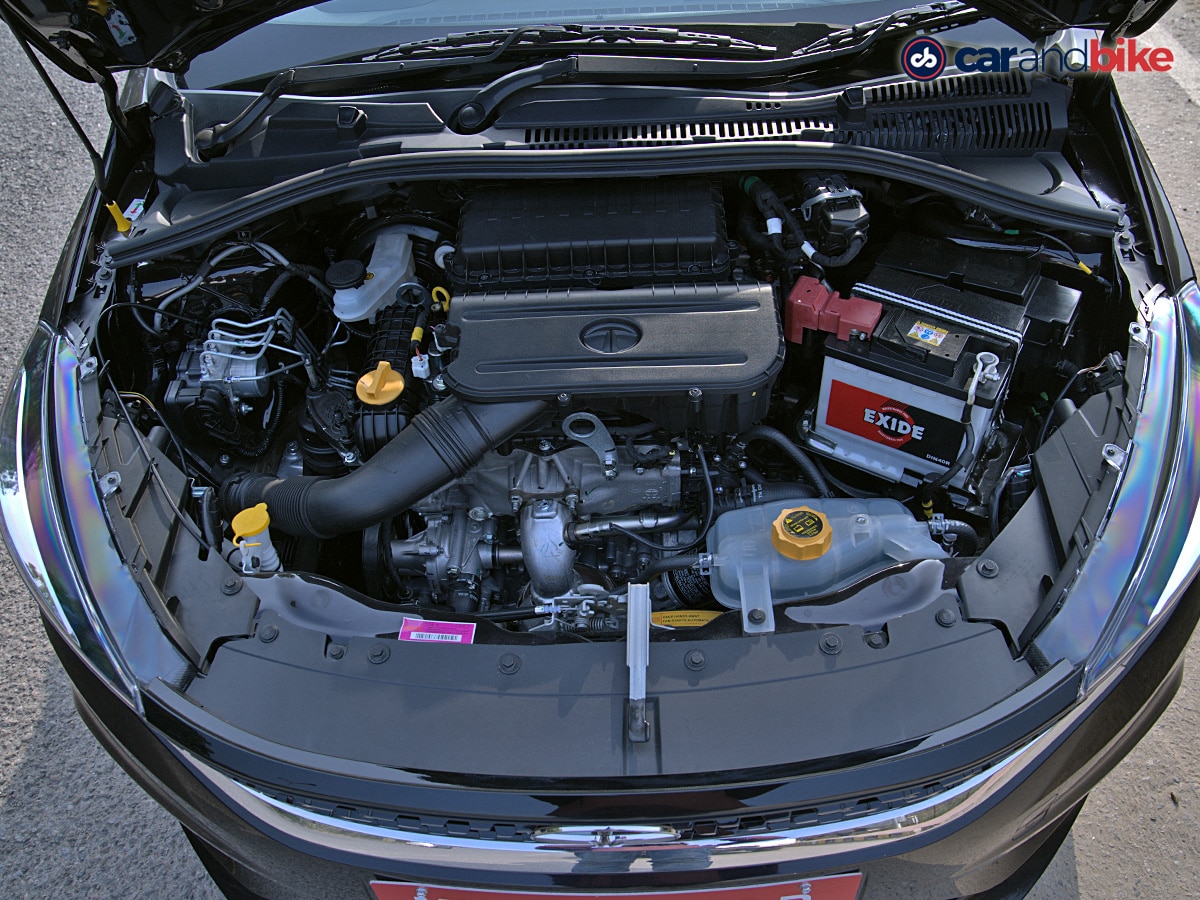 The Tiago iCNG features the same 1.2L Revotron, 3-cylinder petrol engine, but it is tuned to produce 73bhp and 95Nm of peak torque.

Its power delivery is quite linear, and the engine never feels exhausted despite more than 1,050kg of kerb weight. It revs freely and strongly and accelerates easily even when you are at a higher gear at low speeds. The engine offers good low-end punch and city drivability is fine but start pushing the car a bit and you’ll notice that the mid-range is quite dull and lacks the resolve. 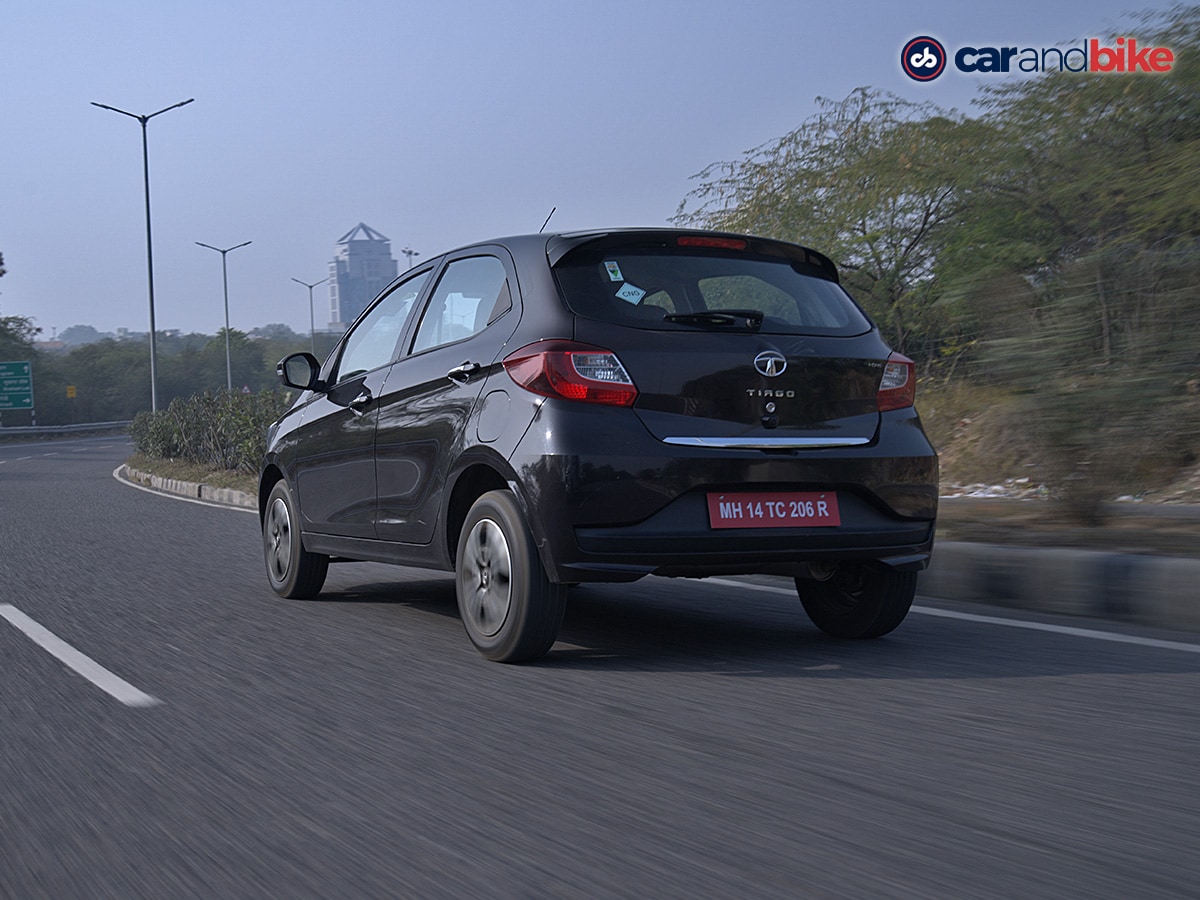 The driving manner of the iCNG variant is similar to its petrol sibling.

Things improve once you reach the higher end of the rpm spectrum. We did feel a noticeable vibration inside, but that’s not a deal-breaker once you get moving. At lower speeds, the car is easy to maneuver, though it is not quick to respond. The compact footprint also works wonders in clogged localities. The suspension is tuned more towards comfort rather than carving out bends. Bumps and irregularities are taken care of with some composure and only the sharpest of the ruts are felt inside. The 168mm of ground clearance takes care of the underbelly from hitting bad patches. We weren’t admirers of the facelifted Tiago’s steering, and our views are similar here as well, with dreary feedback, and a significant amount of understeer when pushed hard.

Tata Tiago iCNG: How safe is it?

In terms of safety, the Tiago iCNG comes standard with dual-front airbags, ABS with EBD, corner stability control, speed alert, seatbelt reminder and speed-dependent door locks, follow-me-home lights, a rearview camera with parking sensor, rear wiper with a wash feature, and rear defogger, to name a few. To further this, Tata has also incorporated the engine to shut off and won’t start up unless the fuel lid is closed. We tried this out, and it works like clockwork. 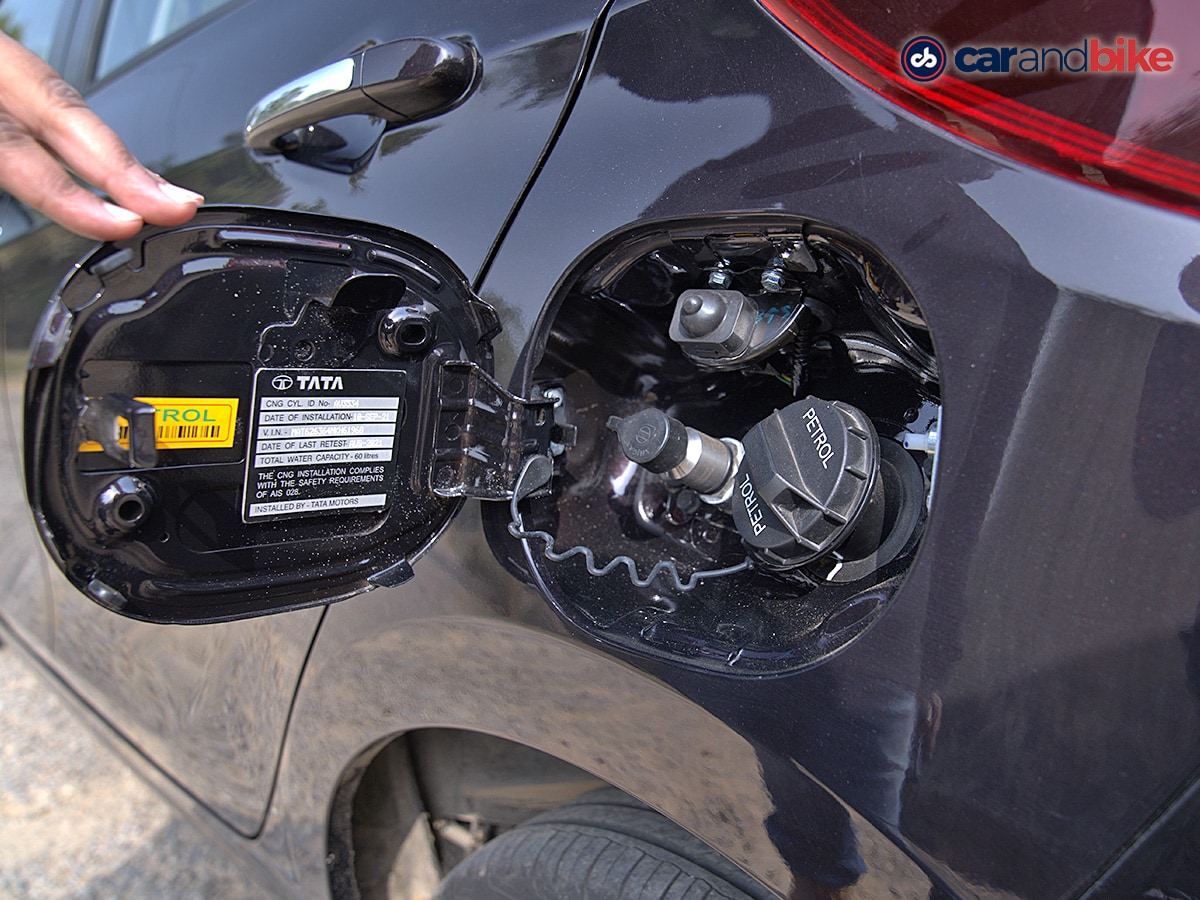 Tata has also incorporated the engine to shut off, which won’t start up unless the fuel lid is closed.

The tech can also detect leaks, at which point it will switch over to petrol automatically. We liked the fact that the car can be started directly in CNG mode, which is a feature not offered by any of its rivals. Tata is still awaiting a Global NCAP rating, but remember the petrol variant received a 4-star rating and Tata will hope to retain that.

The Tata Tiago iCNG is priced from ₹ 6.10 lakh for the base XE trim, going up to ₹ 7.53 lakh for the top-spec XZ+ trim. The starting price is identical to that of the Hyundai Santro CNG, but ₹ 3,000 cheaper than the Maruti Suzuki Wagon R CNG. At the top end, the Tiago is pricier by around ₹ 1 lakh compared to its nearest competitor, the newly launched Maruti Suzuki Celerio CNG. 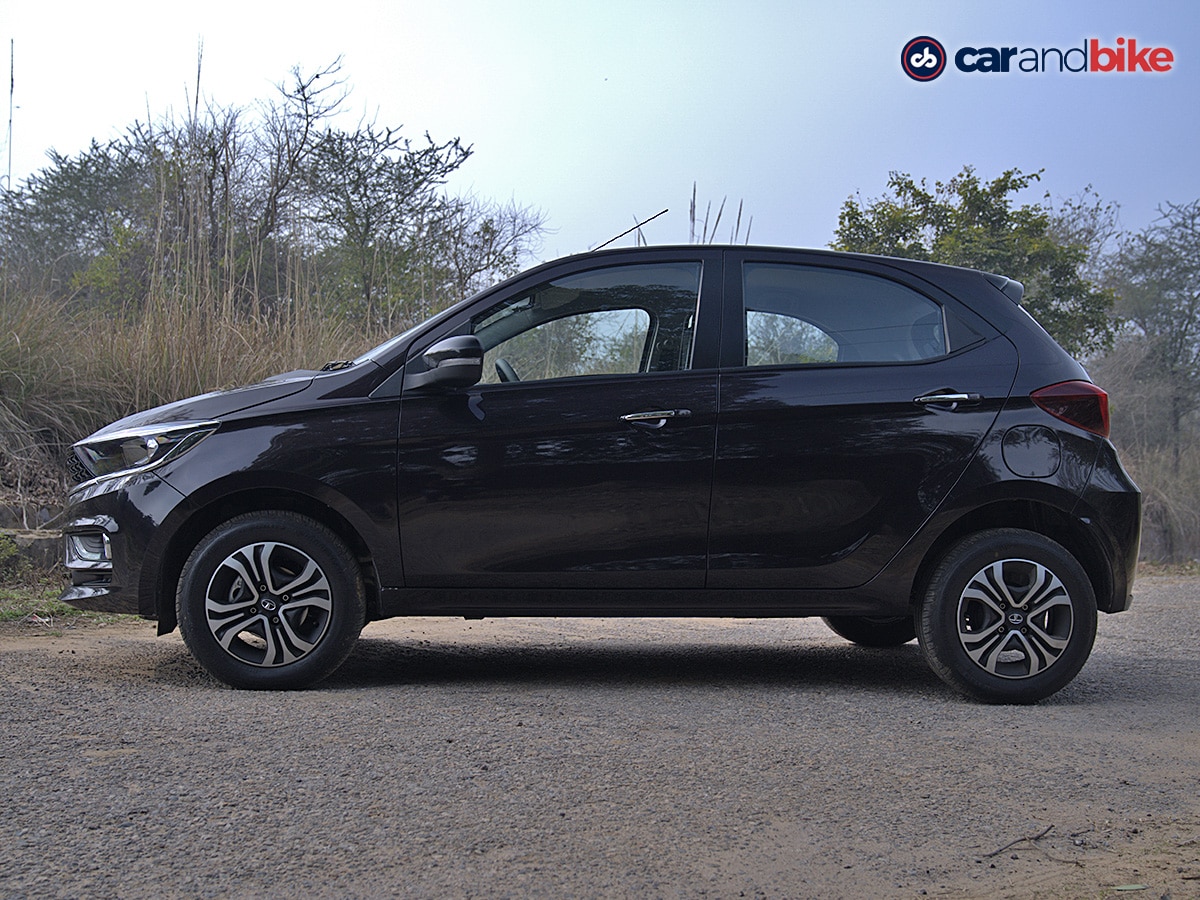 The Tata Tiago iCNG is offered in 4 trims including a top-spec XZ+ variant as well.

However, unlike the others, the Tiago CNG is the only one in the segment to offer four trims, including a fully decked up top-of-the-line variant. Hence, buyers won’t compromise on features over the petrol sibling, which is not the case with others in the segment. Overall, the Tiago iCNG is priced competitively, but it’s worth noting that these are introductory, so expect a hike in the time to come.

Verdict: Should you buy one?

The CNG-powered market is going to be one of the hotly contested segments in the coming future, mainly for two reasons- first, it will look to fill the void left by the lack of newer diesel products in the market, and secondly because premium features will soon trickle down to these models, enhancing their premium quotient among prospective buyers. With their CNG models, Tata will look to capitalize more than 10 per cent in this segment, as it is still in a promising stage with opportunities to grow. 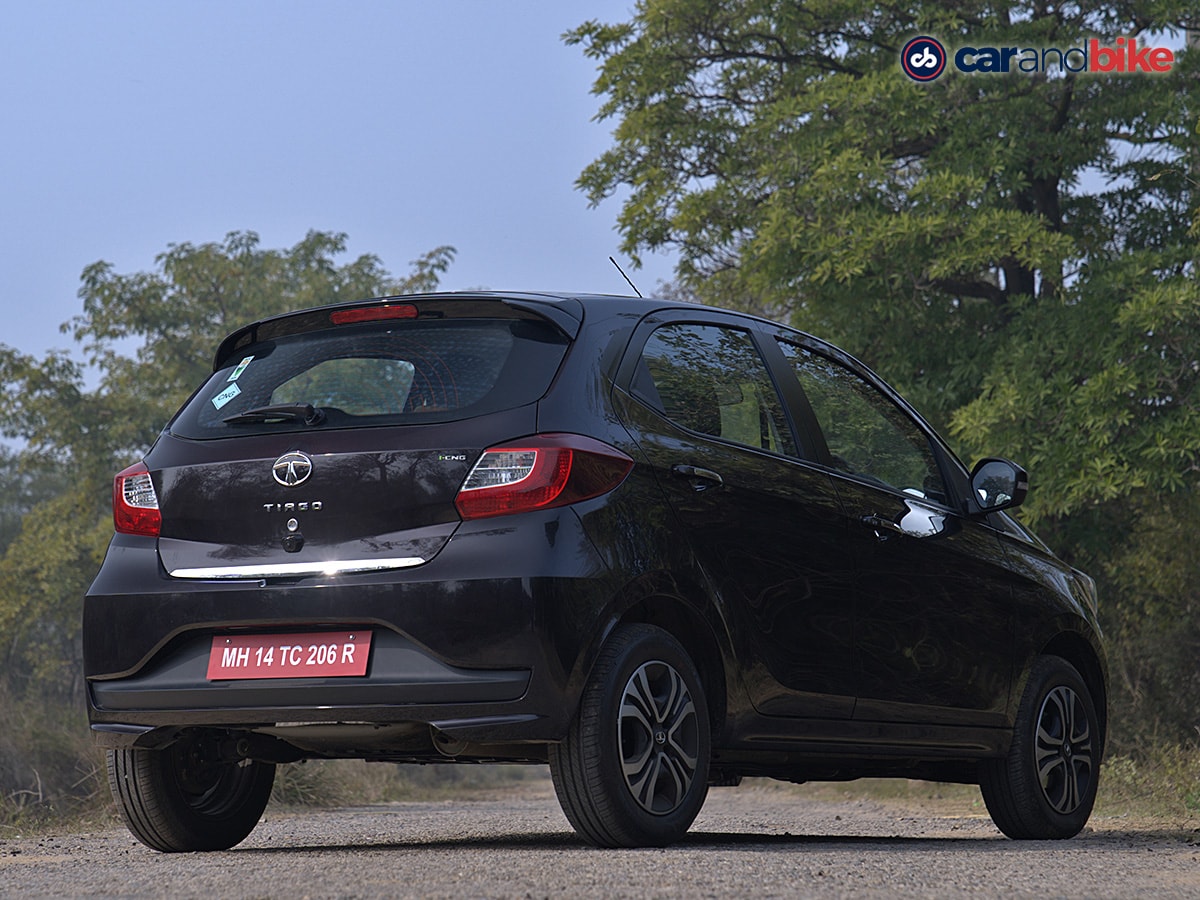 A combined range of around 1,000km could convert buyers to CNG cars.

For us, the Tata Tiago iCNG fulfills most of the promises made by the company, in terms of its driving capability, affordability, and of course features, that are available even in its lower-end derivative for buyers to consider a CNG product as their primary vehicle. Another plus point that goes in the Tiago iCNG case, is the fewer trips required to rejuvenate it, since both the fuel modes offer a combined range of close to 1,000km.